2016-04-16 From Hotel Pessets&Spa, we have the following proposed for you to enjoy both from driving and what our land can offer you:

This is a 245 km route that starts from Sort, combines some of the best roads for international motorcycle touring, with the world famous reference of the UNESCO World Heritage Site of the Romanesque art and architecture of the Vall de Boí.
This route crosses a part of the the Pyrenean in the province of Lleida. It is a popular and funny  route complemented by spectacular views of five regions, or like the local people say, «comarques» (local districts).
If you are provisioned with a good supply of food and drink, this route will offer bikers the chance to enjoy the exhilarating experience of the catalan pyrenees in a single day. But if what you are searching for more relax and comfort, on the road there are many good restaurants with local cuisine.

As mentioned, the startpoint is in Sort — Hotel Pessets:

Sort, with its 2230 inhabitants, is the capital of the region.
Its main tourist attractions are its nature and the River Noguera Pallaresa, with adventure sports like white water rafting, canyoning, kayaking… It has also recently become famous for its lottery centre «La Bruixa d'Or» (Golden Witch), with many people stopping off here to try their luck.
Without leaving the N-260, continue southward for 28 km — and through numerous tunnels — heading in the direction of La Pobla de Segur. This is a fast and winding road, but one that is easy and enjoyable to drive. There are many attractions to enjoy as you ride parallel to the River Noguera Pallaresa, and pass through an area simply brimming with natural charm, on your way towards the Sant Antoni Reservoir.

Gerri de la Sal, which is located half-way between Sort and La Pobla de Segur, is well-worth a visit.  You will find a walled settlement whose main attractions are: the 12th century Romanesque monastery of Santa Maria; a three-storey bell tower; and the salt mines, which were first documented back in the 11th century.


**Before reaching La Pobla de Segur, you can also make a visit to the 5 km-long «Congost de Collegats» (Collegats pass), which has been carved out of the landscape by the River Noguera Pallaresa. One of the most characteristic elements of this gorge is L'Argenteria, which is said to have inspired the architect Antoni Gaudí when he designed façade of La Pedrera, in Barcelona.

At La Pobla de Segur, which is a municipality in the «comarca» of El Pallars Jussà, you can stop to take on liquids and relaxa little bit.


Here, it is well-worth paying a visit to the Art Nouveau-style Casa Mauri and also to the River Rafters' Space, to discover who the rafters were, their history, and the difficulty of their work.


You should then return to the N-260 and continue to cross the territory from north-east to north-west. When it gets to La Pobla de Segur, the road runs right through the centre of the village and – on reaching its southern end – then crosses the River Flamisell. After that, it follows the right bank of the river upstream towards Senterada and El Pont de Suert.


**This is not marked** You are recommended to follow the route along the N-260, but there is also the option of taking the L-503 into the Vall Fosca (Dark Valley) in order to enjoy the natural scenery and lakes that can be found at the entrance to the Aigüestortes and Estany de Sant Maurici National Park. In summer, it is possible to enter this natural space via the Vall Fosca cable car, which will take you to the Sallente and Estany Gento pools in just over 10 minutes, bridging a 450-metre difference in altitude. However, as this road is a cul-de-sac, it is probably recommendable to continue along the N-260. This will offer you another stretch of road full of bends and with a good surface, as it heads through the Creu de Perves Pass (1,350 metres) on its way to El Pont de Suert, which is 35 km from La Pobla de Segur.

El Pont de Suert, which has approximately 2,300 inhabitants, is the capital of L'Alta Ribagorça. It stands near the Escales Reservoir, which is fed by the River Noguera Ribagorçana, and is the pride of the «comarca». This small village is full of natural charm and has considerable tourist appeal. This is the last recommended stop before you leave the N-260, which continues across the Pyrenees, to explore one of the most beautiful and admired places in the Lleida and Catalan Pyrenees: the Vall de Boí. To get there, you must ride your motorcycle northwards from El Pont de Suert, travelling along the L-500 in the direction of Caldes de Boí. You will reach the Vall de Boí after about 30 km.

The Vall de Boí, nestled between valleys and mountains, it offers the definitive example of Romanesque art and architecture and is also the gateway to the Aigüestortes and Estany de Sant Maurici National Park. Quite a flat and scenically interesting road will carry you across the valley before you take the L-501 to the Boí-Taüll Ski Resort, having perhaps first stopped off to enjoy one of the best examples of Romanesque architecture: Sant Climent and Santa Maria of Taüll, which form part of the eight Romanesque churches and one chapel that have received UNESCO World Heritage Site status. You may also find it interesting to visit the Caldes de Boí spa.


Let's get back to the N-230, taking the road direction to Vielha.


Vielha e Mijaran is a municipality in «La Vall d'Aran». It was created in 1970 by the merger of the municipalities of Arròs e Vila, Betlan, Escunhau, Gausac, Vielha and Vilac: some of the former municipalities retain some privileges as «decentralised municipal entities» as does the village of Betren. Mijaran literally means «Middle Aran» in Aranese, as the inhabited part of the municipality is situated in the valley of the Garonne (Garona). The Noguera Ribagorçana has its source on the territory of the municipality, on the opposite side of the watershed. The «ajuntament» (town hall) is in Vielha, spelled Viella in Catalan and Spanish, which is also the capital of Aran.

The municipality is linked to France and to the rest of Catalonia (via the Vielha tunnel) by the N-230 road. The C-28 (old name: C-142) road continues up the valley to Naut Aran, and on over the Port de la Bonaigua (2,072 m) to the comarca of Pallars Sobirà. This road, the higher stretches of which are impassable in winter, was the only route between the Aran valley and the rest of Spain before the opening of the Vielha tunnel in 1948.

Naut Aran is the second largest municipality in Catalonia in terms of surface area (225.8 km², behind Tremp), and was created in 1967 by the merger of the municipalities of Arties, Salardú, Gessa, Tredòs and Bagergue. The name literally means «Upper Valley» in Aranese, and both the Garonne (Garona) and the Noguera Pallaresa have their sources on the territory of the municipality. The town hall is in Salardú. The municipality is linked to Vielha by the C-28 road, which continues to Alt Àneu over the Port de la Bonaigua (2072 m). This road, the higher stretches of which are impassable in winter, was the only route between the Aran Valley and the rest of Spain before the opening of the Vielha tunnel in 1948.

The local economy is based almost entirely on tourism and winter sports. The ski resort of Vaquèira-Beret is one of the largest in the Pyrenees.


A number of local churches have been classified as historic-artistic monuments: Church of Sant Andreu de Salardú, which houses a thirteenth-century sculpture of Christ (el Crist de Salardú); Church of Santa Maria, in Arties and Church of Santa Eulària d'Unha (twelfth century)

Continue the road C-28 to get to Port de la Bonaigua (el. 2072 m.). It is a mountain pass that connects Esterri d'Àneu in the comarca of Pallars Sobirà with Vielha e Mijaran in the comarca of Aran. The Baqueira-Beret ski resort is located at the top of the pass. Please take a minute to enjoy the spectacular views you will have from above.

Lowering the pass, before reaching València d'Àneu, take the right road of «Carretera de Son», passing trough the little villages Son and Jou to reach Espot.
Espot  is one of the entrances to the «Aigüestortes i Estany de Sant Maurici National Park». Espot has been mentioned in documents dating back to the year 839 and he economy of the municipality is largely based on tourism, thanks to the ski resort Espot Esquí and an increase in rural tourism. The area also depends on the milk industry and cattle ranching, specifically bovines. There are various hydroelectric power stations in the area including Sant Maurici, Lladres and Espot.
Take back the C-13, more than three-quarters of the way are already made!

In Escaló you will find Sant Pere del Burgal, a Romanesque Benedictine monastery. The monastery was first mentioned in a precept of Count Raymond of Toulouse in 859. It later became a priory of the abbey of Roussillon. It fell into decline and was secularized in 1570 and confiscated in 1835. It contains frescoes dated to the 11th century.

It follows the village Llavorsí, this village was built literally embedded between mountains and it is divided by the Noguera Pallaresa. There's where most activities begin, like rafting.

The last village before achieving our return to Sort the little village Rialp...


More info about us:
www.hotelpessets.com 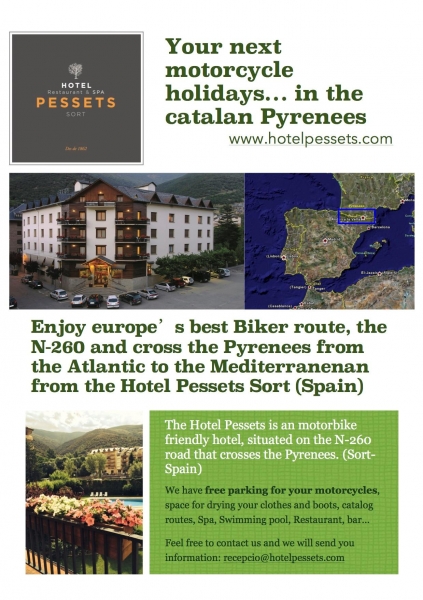