The World of Motorcycles Museum

The rustic façade of Kersting's is right at home in its rural setting, and a cigar store Indian greets you as you approach the main entrance. Once inside, you are exposed to a friendly atmosphere of yesterday andtoday. Being family owned and operated, you will run into a member of the Kersting clan before too long, and you'll feel like a friend soon after that.

It takes a moment to comprehend the vast array on display. With an interest in nearly all brands of two-wheeled transport, you will see machines from eight different countries that span nearly nine decades of history. American made machines are joined by those from France, Italy, Germany, as well as lesser known origins. Jim's first collector bike, a 1931 Indian 4 cylinder, was purchased in December of 1967 at a farm auction. His initial plans were to hold the American made Indian for a few years, then sell it to pay for his daughter's college tuition. When it came time to make the financial decision, his daughter Sandy drove a less than perfect car while in school, allowing Jim to hold onto his beloved Indian. The bike is still on display over 30 years later.

Unlike some collectors, Jim didn't rush into things. His second purchase would take place nearly two years after the Indian. A 1926 Harley-Davidson® BA was taken in a trade in February 1969, and was first put on sale amongst the other used machines. With no takers to be found, the VBA relegated to the collection. Having paid far less than $1,000 for the BA in 1969, it now seems to have been a stroke of genius holding on to the vintage Harley-Davidson®.  It would be more than two years before the third entrant to the museum was acquired, and it too was first offered for sale. At the time, a 1916 Harley-Davidson® model J seemed to be less desirable to the used bike audience, so Jim was «stuck» with yet another relic. Little did he know that the crusty old scooter would someday become a coveted model from Harley-Davidson's past.

As the years rolled by, Jim's collection expanded. His current inventory includes an array of nearly 100 machines, many of which have all but disappeared from the everyday world. Early Japanese entrants are placed alongside classic British mounts, and the entire collection is punctuated by related hardware, clothing and display materials. Postcards denote each of the cycles on display, and additional questions are happily answered by Jim. In addition to the collection being historic, every piece of this museum has a personal history. Many of the cycles were desired by Jim in his early days, but had to wait until finances allowed their eventual purchase. 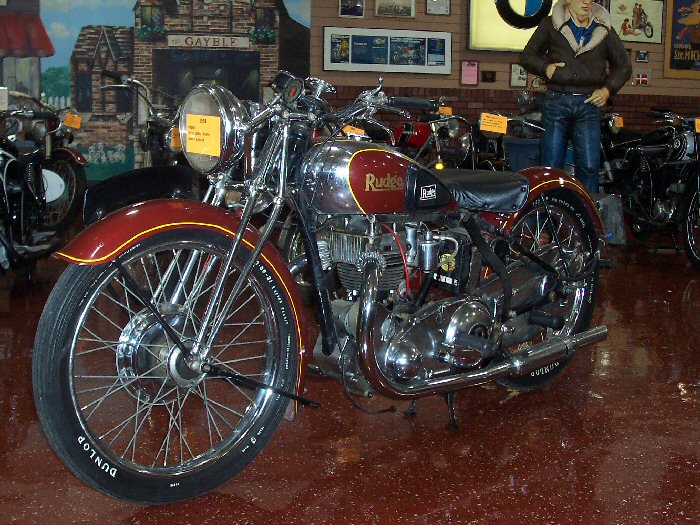