2011-04-21 When visitors come to Hartford, a short day trip is in demand to see the treasures of the Bluegrass Motorcycle Museum.  Owned and operated by Jack Embry and his wife Nancy, the displays boast over 20 vintage, American made motorcycles, and 30 years’ worth of motorcycle memorabilia.  Even before the museum was opened in the mid-90s, Mr. Embry’s passion for restoring antique motorcycles drew onlookers from near and far.  To date, the couple states that they have hosted guests from 29 states and 6 countries.  Jack, also well-known as “Hombre” to the local population and his motorcycle fraternity brothers, takes pride in the fact that many of his historical bikes are all original and road-ready.

The oldest bike displayed is a 1911 Yale, with a tandem seat and original paint designs.  This rare, early 20th century bike is the only one still in existence today.  A 1915 Shaw is decked out in its original red and white paintjob, wheels carved from wood, carbide lamp, and well-worn leather.  Jack’s 1930 Harley Davidson V Model is a special display with original solo seat and color scheme.  One of the most interesting pieces is a 1955 Harley Davidson 55L 1736, boasting an original model sidecar in tow.  Perhaps the most valuable motorcycle in the museum is the 1912 Eagle that was manufactured in Brockton, Massachusetts.  Only 10 of these originals exist today, and only four are still operable.  Jack’s Eagle is one of the four rarities, and is the only bike that still has the original paintjob.  Currently, Jack is working on a restoration project involving a 1906 Indian, which has already consumed three years of hard work.

The museum also holds several pieces of historical and limited edition manufacturers’ memorabilia.  Helmets and gloves, jackets and vests, and bottles and ashtrays displaying motorcycle ornamentation of all types may be seen here.  Included in this collection are an Indian glass candy dish made in 1918, as well as a 1950 Indian belt buckle and lighter combination.

All displays and motorcycles are absolutely rare and mostly original.  Jack continues to restore historical bikes and memorabilia for personal fulfillment and public viewing. 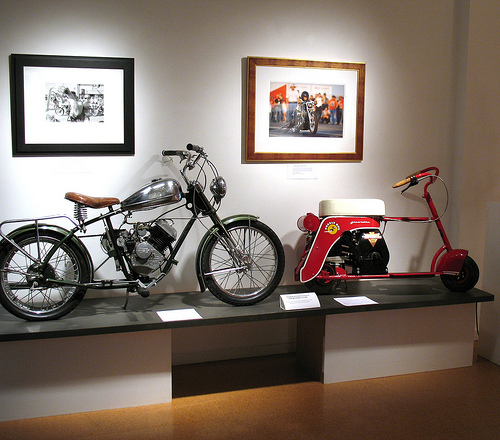