Texarkana is a great place to start this loop through the Timberlands along the Southwest Trail for a total distance of 166 miles.

South Arkansas terrain is flat and runs through a patchwork of timber in different stages of growth. In the first part of the 20th century, residents of the region cut the timber and tried to farm row crops like those in the Delta. But eventually, farmers realized that their future was in managing the timber resources of the area, which is the main agricultural business in this part of the state today.

US 71 bisects the small town of Fouke, which lends its name to a bigfoot supposedly roaming the region. People still come looking for the “Fouke Monster,” a tale on which “The Legend of Boggy Creek” movies were based.

Arkansas Highway 160 crosses the Red River near I-49, and from there the landscape changes, giving way briefly to a segment of fertile river-bottom farmland. And since the approximately 1,300-mile-long river cuts a wide swath, there is a thriving farming economy in the area. The ride continues up the road back through the Timberlands to Magnolia, Waldo and Hope.

While Hot Springs receives fame for being Bill Clinton’s “boyhood home,” Hope is the actual birthplace of our nation’s 42nd president and the site of the President William Jefferson Clinton Birthplace Home National Historic Site.

This mixture of delta and timberland terrain, history and folk legends makes the Southwest Trail a classic route for motorcycle riding in Arkansas.
Courtesy of Arkansas Cycing 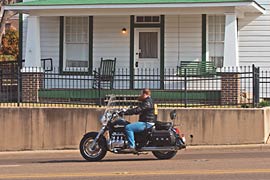